As many as 13 species of sunbirds frequent the park

As we expect the rains, soon there will an abundance of wild flowers in the park. Wild flowers attract sunbirds that are incredibly created and are always a pleasure for those who take time to find and watch them.

According to the checklist of birds of Nairobi, there are possibly as many as 13 species of sunbirds that frequent the park, ranging from rarely seen to commonly seen. Most sunbirds feed largely on nectar, but they will also eat insects and spiders, especially when feeding their young.

Flowers that prevent access to their nectar because of their shape (for example, very long and narrow flowers) are simply punctured at the base for access, then the birds sip the nectar. Fruit is also part of the diet of some species. Their flight is fast and direct, thanks to their short wings.

Sometimes it can be very rewarding to find a place where there are many flowers and then sit quietly and wait for sunbirds to visit the flowers.

For instance, the Leonotis leonurus (lions head or wild dagga) attracts nectivorous birds (mainly sunbirds), as well as various insects, such as butterflies. The flower is mainly orange to orange-red colour and tubular shaped.

The park has a great variety of birds, as many as 550 species at certain times. Some of them have beautiful colours, including frequently seen species like the variable sunbird, scarlet chested sunbird, collared sunbird, Amethyst sunbird and bronze sunbird.

I always find it a joy to see birds when driving in the park. God has created so such amazing diversity. When we go with the attitude of “bird watching”, all too often, the larger species like rhino, buffalo, and even lions just “get in the way!“ 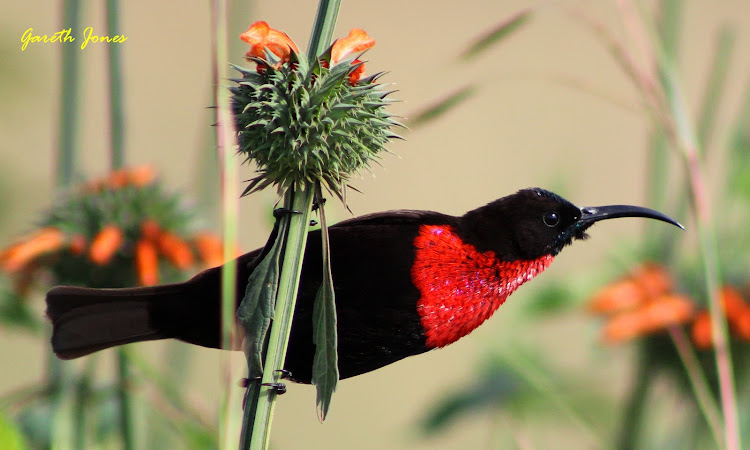